More on the debate regarding the caffeine levels in "energy drinks"

Not too long ago I posted a series of posts on recent reports related to the debate on whether the so called "energy drinks" contained dangerous levels of caffeine.  See here, here and here.  Now comes news that the Journal of the American Medical Association has published an article on the subject, available here, detailing how the ingredients in energy drinks may be harmful to some individuals.  AboutLawsuits has more on the story here.
Posted by Professor Alberto Bernabe at 8:06 PM No comments:

New study on medical errors but no study on gun violence 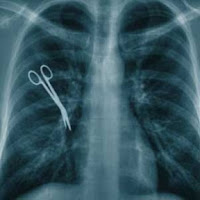 I am taking a short break from grading final exams to post a few links to a couple of interesting items in the news from last week.

First, there was a new report on a new study quantifying how often surgeons make mistakes that should never happen -- such as leaving an object in a patient, performing the wrong procedure, or performing the procedure on the wrong body part. The Washington Post coverage is here (with charts), and the study press release is here.  AboutLawsuits has a comment here.  The PopTort has a comment here.  Thanks to Public Citizen for the links.

Second, there was the terrible news of the school shooting in Connecticut.  As you know the event has regenerated the debate on gun control and on whether there can be liability for the injuries suffered.  There is a lot of literature on this.  But Torts Today has published a piece on a part of the debate that I did not know about.  The fact that Congress has banned gun injury prevention research.  As explained in the article, originally published in the Journal of the American Medical Association,


Injury prevention research can have real and lasting effects. Over the last 20 years, the number of Americans dying in motor vehicle crashes has decreased by 31%. Deaths from fires and drowning have been reduced even more, by 38% and 52%, respectively. This progress was achieved without banning automobiles, swimming pools, or matches. Instead, it came from translating research findings into effective interventions.

Given the chance, could researchers achieve similar progress with firearm violence?  It will not be possible to find out unless Congress rescinds its moratorium on firearm injury prevention research.

As long time readers of this blog know, in PLIVA v. Mensing, the Supreme Court held that state-law damages claims based on inadequate warnings by a generic drug manufacturer were preempted by federal law because federal law prohibited the generic manufacturers are required to use the same labels as the branded labels. This ruling makes it extremely difficult for a plaintiff to support a state-law damages claim based on a generic drug manufacturer's failure to warn. A new study by an Indiana University medical school professor and two co-authors has found that nearly 78 percent of generic medicines have safety warnings that differ from labeling on equivalent brand-name drugs. The study is called "Consistency in the safety labeling of bioequivalent drugs." (Here is an abstract).  With a new case on the subject before the Supreme Court, this study is sure to become very important in the debate.  Pharmalot has more on the story here.  Public Citizen has more here.
Posted by Professor Alberto Bernabe at 11:24 PM No comments:

As every law student knows, the longstanding rule in the US has always been that, subject to very few exceptions, there is no duty to help someone in need of help. In other words, there can be no liability for failing to help someone even if their life depends on it. The rule has been severely criticized over the years but it is still generally accepted and applied.

As I am sure you have heard by now, a few days ago a man pushed another man onto the tracks of the NY City subway and no one came to his aid. He was killed by a train while bystanders watched and at least one photographer took pictures. The incident has generated a new discussion as to whether the people watching should have helped. Much of the attention has been expressed as outrage at the photographer who decided to snap a few shots rather than to do something for the victim who was in danger and struggling for his life.

Yet, it is unlikely that the incident will result in any changes in the law. Courts have always been reluctant to impose a duty to help for a number of reasons. First, it is difficult to draw a line between a moral duty and a legal one. Second, it is generally thought that it might actually be better to discourage people from helping unless they know what they are doing (ie, have training to intervene) for fear that in trying to help, people might make things worse. Good Samaritan laws are usually enacted to encourage those with training to intervene in emergency situations to do so when they are not obligated to do so. Finally, Courts are reluctant to impose a blanket duty in all cases because it might force those who would have the duty to help to place themselves in dander. No one wants to force people to help if doing so will put them in danger.

For a good discussion of the subject go to Prof. Jonathan Turley's blog here and the NY Personal Injury Law Blog here.

Last May I wrote about Bartlett v. v. Mutual Pharmaceutical Co, a decision of the Court of Appeals for the First Circuit in which it recognized a cause of action against the manufacturer of a generic drug.  Go here for my original post and links to comments on the case.  You can read the full opinion here.

At the time I wrote that "what makes the case controversial is the question of whether the decision is contrary to the holding in PLIVA v Mensing, the US Supreme Court decision holding that inadequate warnings cases against generic drug manufacturers are preempted because federal law requires the warnings for generic drugs to be identical to those of branded drugs."

Following that line of reasoning, the defendants appealed and last week the Supreme Court announced it would review the case.  Go here for links to all the relevant documents in the case.

In my original post,you will find a number of links to comments on the case after it was decided by the Court of Appeals.

For a more recent comment, go to Litigation and Trial where Max Kennerly discusses the case in detail and offers his opinion on the issue of preemption in general.

Posted by Professor Alberto Bernabe at 8:47 PM No comments:

Court will not grant rehearing on cigarette warnings case

I have been following the litigation related to the constitutionality of the government regulations on cigarette warnings.  See here for the most recent post and here (and scroll down for all the rest).  Here is the latest:  AP reported yesterday that the court of appeals denied the federal government's request to reconsider the decision that declared the regulation unconstitutional.  As you recall, the regulation requires tobacco companies to put large graphic health warnings on cigarette packages to show that smoking can disfigure and even kill people.  It is fair to assume the case is working its way to the Supreme Court.  Go here for the AP story and here for short report (with links) at The Jurist.
Posted by Professor Alberto Bernabe at 5:13 PM No comments:

It has been a while since I last posted something on the case pending before the Supreme Court on whether corporations can be sued under the Alien Tort Statute.  So, here is a link to a short article in which the Harvard Law School's International Human Rights Clinic argues the ATS does apply to corporations.  To catch up with my previous posts on the subject go here and scroll down...

Thanks to How Appealing for the link.
Posted by Professor Alberto Bernabe at 4:52 PM No comments:

The Center for Justice and Democracy has published Tort Litigation and Juries: By the Numbers (available here). The briefing summarizes recent statistical analysis of tort filings, trials, and awards.

Thanks to the TortsProf blog for the link.
Posted by Professor Alberto Bernabe at 10:17 PM No comments:

As I am sure you know, the Federal Torts Claims Act preserves immunity for the Federal Government in cases in which the conduct can be considered a "discretionary function."  But, the case law has made it clear that not all conduct that is discretionary deserves immunity.  Only that conduct which is discretionary in order to pursue a public policy based on economic, political or social concerns is considered the type of discretionary function that should be protected from possible liability - all in the name of protecting separation of powers.  This distinction is key because otherwise the government could claim immunity for any and all conduct that was not mandated by regulations of some sort.

Day on Torts is reporting, however, on a recent case which appears to eliminate the distinction thus recognizing immunity for a ministerial decision which, although discretionary, should not be considered to be the type of discretionary decision that should provide immunity for the state.  The case is called Kohl v US and it is available here.
Posted by Professor Alberto Bernabe at 10:02 PM No comments: